I Just Got a Raspberry Pi — What Do I do?

First, follow the advice of Douglas Adams in The Hitchhiker's Guide to the Galaxy: Don't Panic!  We'll walk through the steps from opening the box to a running Pi.  After that, you're on your own, and the sky's the limit!

If all you have is the Raspberry Pi you will have to collect more stuff.  Our Raspberry Pi shopping List can help with that.  Here's what you'll need:

☐ Access to a desktop or laptop computer, MacOS or Windows.
☐ Access to a network connection, wired or wireless.
☐ A microSD card; 16 GB is plenty, be sure to get Class 10.
☐ A USB adapter for that microSD card.
☐ A Raspberry Pi Computer.
☐ A power supply for your Pi; be sure what you get matches the Pi you have.
☐ A USB keyboard and mouse
☐ An HDMI monitor with cable, or some other monitor and adapter cable.
☐ A case for your Pi (optional)
☐ Maybe a parts kit like this one (optional)

The microSD card stands in for a hard disk for your Pi.  Think of it as a tiny solid-state disk.

Flash an OS onto the microSD card

This is the only thing you'll need that desktop or laptop for.

☐ Download balenaEtcher; there's a version for your OS.
☐ Download an operating system image.
☐ Use balenaEtcher and the USB adapter to flash the image to your microSD card.

You may need up to 3 GB of disk space on the desktop / laptop to hold the Raspbian image.

You can get the official Raspberry Foundation images from their download page.  If you're just getting started, get the image with "desktop and recommended software."  The "lite" image has no GUI and is for embedded systems.  You could also use the KSU Workshop image.

Do you have a case, maybe?

If you got a case, you might install the Pi into it at this point.  No case? No problem!  Just don't put your PI down on metal surfaces or tools and keep metal things away.  You don't want to short any circuits! We've found that the Argon NEO is a very nifty case for the Pi 4.  It protects the Pi and, with the top off, exposes the pins, with labels!

Plug it all in — except the power supply 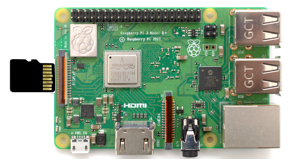 ☐ Gently insert the microSD card into the holder.  The slot's on the bottom, except Pi Zero; the pins face up.
☐ Plug in the keyboard and mouse.
☐ If you have an Ethernet cable and your Pi has an Ethernet connector, plug that in.
☐ Plug in the HDMI cable and be sure the monitor is turned on.

The start-up process for Raspbian checks for a monitor.  If it's not plugged in and turned on when the Pi starts, it won't be detected, and that means it won't work.

The red LED near the microSD card is a power indicator, and the green one indicates activity (reading or writing) on the microSD card.  (The Pi Zero models do not have power LEDs; the activity LED is located near the power connector.)

If all goes well, you'll see a "rainbow screen" briefly, then one raspberry for each computer core, a start-up splash screen, and finally the Raspbian desktop.

Go through the setup process

The first time Raspbian is started, it will guide you through a setup process.  (If you're using a Raspbian image generated for a KSU workshop, the setup process has been completed; you may still need to configure a wireless network if not on a KSU campus.)

➛ Preferences ➛ Raspberry Pi Configuration, then select the “Interfaces” tab and enable the interfaces of your choice.  You might be prompted to reboot.

Your raspberry Pi is set up and running.  Now you're ready to do important stuff with it.