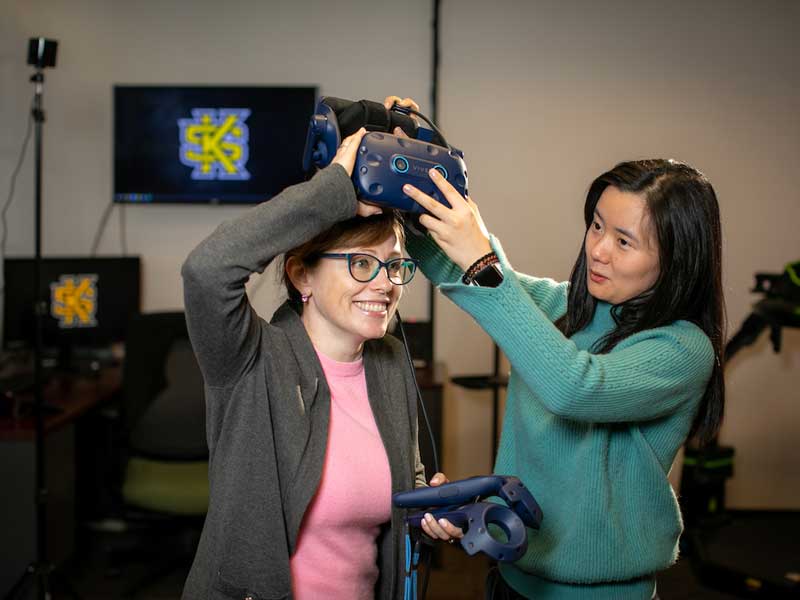 MARIETTA, Ga. (Feb 25, 2020) – Among the many skills medical students must learn by the end of their educational journey is the ability to empathize with patients. To help them better understand those they will serve, students in Kennesaw State University’s game design degree program are developing a state-of-the-art virtual reality (VR) simulation that offers a glimpse inside the head of someone suffering from Parkinson’s disease.

The simulation, built by students in Kennesaw State’s Department of Software Engineering and Game Design and Development for their counterparts at Augusta University’s Medical College of Georgia, is the result of several months of research and testing between the state’s only accredited game design program and only public medical school. Originally a student project developed in the serious and educational game design course taught by KSU professor Joy Li, it is now being tested by first- and second-year medical students studying clinical skills as a potential method of building empathy toward patients afflicted by tremor-based neurological disorders.

“The best thing about this project is the fact it solves an existing problem that we might not have otherwise identified,” said Li, an assistant professor of computer game design and development in the College of Computing and Software Engineering. “As a professor, we are limited in our scope given our background in game design, but by collaborating with other experts, we are able to expand the potential applications of the technology we can create. That is a tremendous asset to our students as they work to design the game.”

Inside the simulation, users are tasked with completing a typical morning routine – turning off an alarm clock, taking medicine out of a bottle and cooking breakfast – all while their hands tremble similarly to those of someone with Parkinson’s disease. The project was initiated by Elena Wood, associate professor and assistant course director for physical diagnosis at Augusta University, as an innovative way to demonstrate the difficulties associated will the disease.

“We are constantly looking for ways to improve our coursework, and I have always gravitated toward using more technology,” said Wood, whose son studies electrical engineering at Kennesaw State. “This collaboration seemed like a natural fit with two of the state experts in their respective fields, and I have been really impressed to see undergraduate students handle this level of responsibility.”

Among the students who assisted in the project was Cody Ducleroir. Currently completing a degree in computer game design and development, he has continued develop the simulation as a directed study under Li. Among the challenges, he said, were determining ways to make the user’s hands tremble in a lifelike manner while identifying tasks that highlight the difficulties associated with the disease.

A lifelong gamer, Ducleroir said the project has shown him the breadth of the game design industry.

“This process has really opened up my eyes,” he said. “When you’re growing up, you tend to gravitate toward what you consider to be a fun game rather than a purely educational game. Figuring out how to make educational games more fun and engaging has been one of the rewarding parts of this project. This has certainly opened up more avenues for potential employment.”