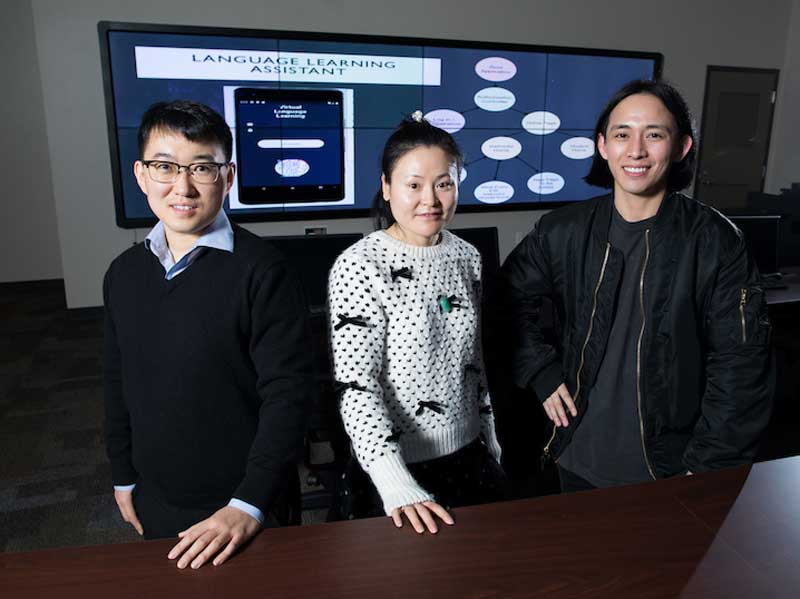 MARIETTA, Ga. (Mar 4, 2020) – Seeking a way to better train diplomats in foreign languages, Kennesaw State University and the U.S. Department of State have partnered to develop a program that uses artificial intelligence (AI) to hold human-like conversations with its users.

The chatbot, a form of AI that can conduct conversations with users via auditory or textual means, was created over the course of the fall semester by a team of students in Kennesaw State’s College of Computing and Software Engineering, led by assistant professor of information technology Meng Han and associate professor of computer science Selena He. The project, one of several recently awarded to KSU by the State Department’s Diplomacy Lab, was meant to test the viability of chatbots as a training tool for the Foreign Service Institute (FSI).

In its current form, the mobile phone-based chatbot allows users to either speak or text the AI as a method of practicing a foreign language. In one scenario, the user must attempt to order a pizza while the AI asks questions in Spanish, prompting the user to respond appropriately in order to complete the task. Now in beta-testing, it is currently being used by the institute’s Spanish section in hopes of being further integrated into other sections in the future.

“For years, we have noticed a growing demand for this kind of artificial intelligence,” Han said. “Given our background in software development and AI, Dr. He and I felt this was a great opportunity to explore its educational applications and to give our students an opportunity to hone their skills on an impactful project with the federal government. These opportunities don’t come often for undergraduates, and the experience they have gained throughout this process has been invaluable.”

The team was composed of two undergraduate computer science students, Parth Patel and Syed Isfar, and graduate student Honglai Peng. Patel and Isfar, both of whom have since graduated, worked to build the program through He’s mobile software development course while Peng, conducting a directed study under Han, helped to develop the AI algorithm. Over several months, the students spoke with FSI’s Educational Technology Advisor Erin McKinley and training specialists in the School of Language Studies Spanish section via video conference calls to discuss pain points and potential solutions.

“The project proposal sprouted from a question that my teammates and I had whether or not chatbots could be integrated into training at the Foreign Service Institute,” McKinley said. “The general public uses AI in various ways every day, whether hailing a cab or booking a flight, so the idea of a chatbot is not a foreign one.”

Chatbots are an attractive educational tool due to the “stress-free” environment they can create, He said. Accessible 24 hours a day through multiple devices, they remove the pressure of having to interact face-to-face with an instructor and allow the user to customize their learning schedule.

“The AI can build a conversation smartly, making it appear as if you are talking to a human even though no one is on the other side,” she said. “This has a great deal of potential not only in the educational environment but also in other industries, such as healthcare. Soon, you may be able to speak about complications while maintaining anonymity. The possibilities are endless.”

While the chatbot undergoes testing at the FSI, Peng and a new crop of students are working to further develop the program to generate more scenarios and serve different languages.

“I have gained a great deal of experience from taking part in this project,” Peng said. “Now that we have a proof-of-concept, I’m excited to see what other directions we can take the chatbot in order to benefit the FSI.”

KSU is one of 35 universities involved in the Diplomacy Lab public-private partnership that enables the State Department to “course-source” research and innovation related to foreign policy challenges. Partner conduct research on the State Department’s most critical matters, including climate change, democracy and human rights, counterterrorism, global health, energy security, gender equality, economic policy trafficking of individuals, food security, and conflict and stabilization. Awarded five projects in the fall, KSU this semester was selected for three projects involving faculty in the College of Computing and Software Engineering and the College of Humanities and Social Sciences.