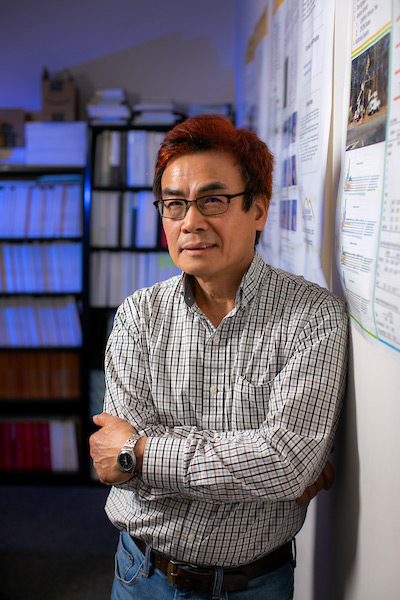 MARIETTA, Ga. (May 29, 2020) — There are few problems that cannot be solved through machine learning, and at Kennesaw State University, a multidisciplinary team of students led by professor Chih-Cheng Hung are at the very forefront of generating solutions through the power of computing.

Since joining the university in 2000, Hung has mentored nearly 80 students on cutting-edge projects through his Center for Machine Vision and Security Research (CMVSR), which focuses on developing applications for a myriad of topics in the field of computing, such as pattern recognition, machine learning and artificial intelligence. Hosting more than a dozen visiting scholars since its inception, it is currently home to one doctoral student, six graduate research assistants and seven undergraduate assistants. Students come from each of the three departments in the College of Computing and Software Engineering (CCSE) but it isn’t limited to just computing disciplines; one student is pursuing a degree in electrical engineering.

While one goal of the center is to serve as a vessel through which the CCSE is preparing students for their careers in the field, Hung said a fortunate side effect of having participated in the lab is the exposure students, particularly undergraduates, receive to conducting research. Many who have conducted work in the lab have gone on to attend graduate programs at top institutions across the country while others have gone on to accept positions at technology giants such as Google, Microsoft and Adobe.

“Many students generally are not aware of research opportunities there are in a university setting nor are they considering research as a potential career path,” said Hung, who generally recruits students from the courses he teaches. “From my experience, students who graduate from our lab found that employers are  impressed by the research work they have done here. It has either helped them to obtain internships for more industry experience, acquire full-time jobs or has influenced them to purse a Ph.D. en route to becoming researchers.”

Such is the case for Michael Wong, who graduated from KSU in May with a graduate degree in computer science. He was first introduced to Hung as an undergraduate student enrolled in CCSE’s algorithm analysis course. It was at that time Wong told Hung that he had interests in studying cybersecurity and machine learning, to which Hung encouraged him to become a “modern computer scientist” by researching real-world uses for artificial intelligence.

By the end of his first semester, Wong approached Hung about joining the lab and has since been one of his longest tenured student researchers, exploring topics such as remote sensing, which involves data and images collected via satellite, to image segmentation, in which digital images are grouped into categories that allow for easier consumption. Following graduation, Wong will join the Georgia Tech Research Institute as a research scientist.

“I give a great deal of credit to Dr. Hung, because the interview questions for the position felt a lot easier than what I would receive from him on a daily basis,” said Wong with a laugh. “He always makes himself available and is there to mentor us. At the same time, he offers some of the best critiques. Even though this is just master’s level program, I feel like his guidance and the opportunities through the CMVSR is what will prepare me for an eventual Ph.D.”

Another student, Mahsa Shokri Varniab, said the work she conducted in the lab is, in fact, what led her to a doctoral degree. An international student from Iran, she is completing her master’s degree in computer science and has been accepted into KSU’s Ph.D. in Analytics and Data Science program.

Similar to Wong, her research interests have included image classification. She is working on an algorithm that is able to classify images with a greater degree of accuracy, which could be use in the medical field to identify tumors with more precision.

The greatest benefit she received from participating in the lab was the patience from Hung as she developed her solution.

“There were several times where I had problems in getting the correct results, but Dr. Hung stepped in to provide me some much-needed direction on how to develop it further,” she said. “He is so patient and helpful, and every student in the lab benefits because he gives us the time to arrive at a solution.”

Oscar Garcia, one of the lab’s graduate research assistants, said research conducted in CMVSR is atypical of the experience he received elsewhere. After earning a degree in electrical engineering at Auburn University, he began a graduate degree at Texas A&M University but left before completing to accept a job at Vericor Power Systems. Intent on finishing his degree, he enrolled at KSU to earn a master’s in computer science.

“Kennesaw State isn’t typical,” he said. “Here, I’m finding that the professors are more engaged with the research you are conducting and really drive you to do your work the right way. You’re given a lot more freedom to research topics that really stand out to you.”