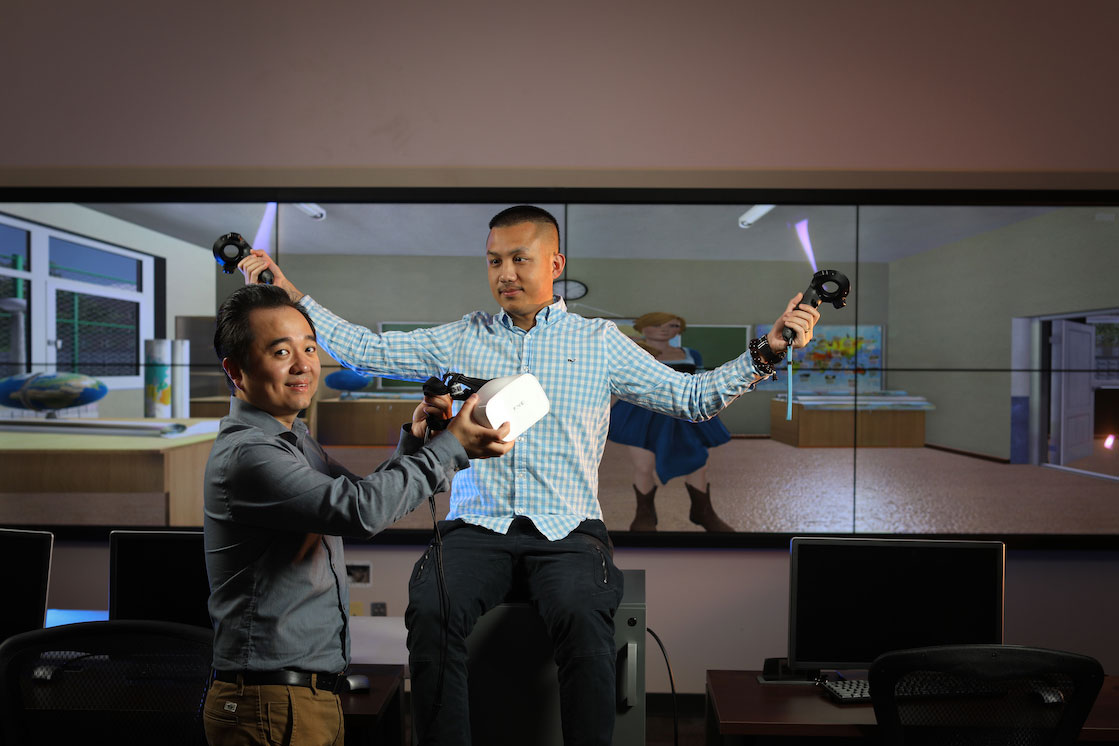 Since 2011, Mei has researched how VR can be used to improve the ability of children with autism spectrum disorder (ASD) to learn. The Centers for Disease Control and Prevention estimates about one in every 59 children has been diagnosed with autism, and Mei said many struggle to maintain attention in classrooms, which can hinder their development of social and learning skills. After receiving an internal grant from Kennesaw State’s Office of Research last year, Mei began developing a computer program that could be used by therapists to help children better focus.

This month, Mei was awarded a $174,498 grant by the National Science Foundation (NSF) to further develop a prototype and to conduct preliminary testing with a sample group of students with ASD and their therapists.

“In a virtual environment, we are totally in control of what the children can see,” said Mei, an assistant professor of software engineering and game development in Kennesaw State’s College of Computing and Software Engineering. “Using this approach, we are able to put them in a familiar setting, such as a classroom, and  determine what may distract them from the lesson and help them refocus their attention.”

In the prototype’s current form, users wear a VR headset that immerses them into a traditional classroom complete with a virtual teacher, desks, a chalkboard with a map and a window that opens to trees blowing in a slight breeze. Once on, the headset can track the user’s eye gaze and generates a heat map of where the student is looking. If a student spends too much time looking at a clock hanging on the wall above the teacher, for example, the program could respond by removing the clock, thus encouraging the student to maintain eye contact with the teacher. After all the distractions have been detected and removed from the virtual scene, the system will reintroduce the distractions back into the virtual scene one at a time. With reinforcement strategies, the student can gradually adjust to the virtual distractions.

With the NSF grant, Mei will conduct a two-year study on the effectiveness of the proposed system. In the short term, he will work to perfect the attention capture functions of the prototype and develop strategies for positive reinforcement among a small group of users. The entire system will then be put to the test in a six-month-long study with K-12 students with medium to high levels of ASD.

Though VR has been used for some time as an educational tool, Mei said he noticed that there was a gap in research when it came to using it as a therapeutic tool for those diagnosed with ASD. A major advantage to using VR is the ability to create “impossible experiences,” such as a disappearing clock or transparent teacher. By removing the need for in-person visits with a therapist, the approach could present a more affordable option for families or even allow them to interact with therapists remotely.

“On a small scale, the project has a lot of value as a tool in helping therapists with attention training,” Mei said. “The bigger picture is, this project could have a much larger impact on how VR is viewed as an overall therapy method beyond those with autism.”