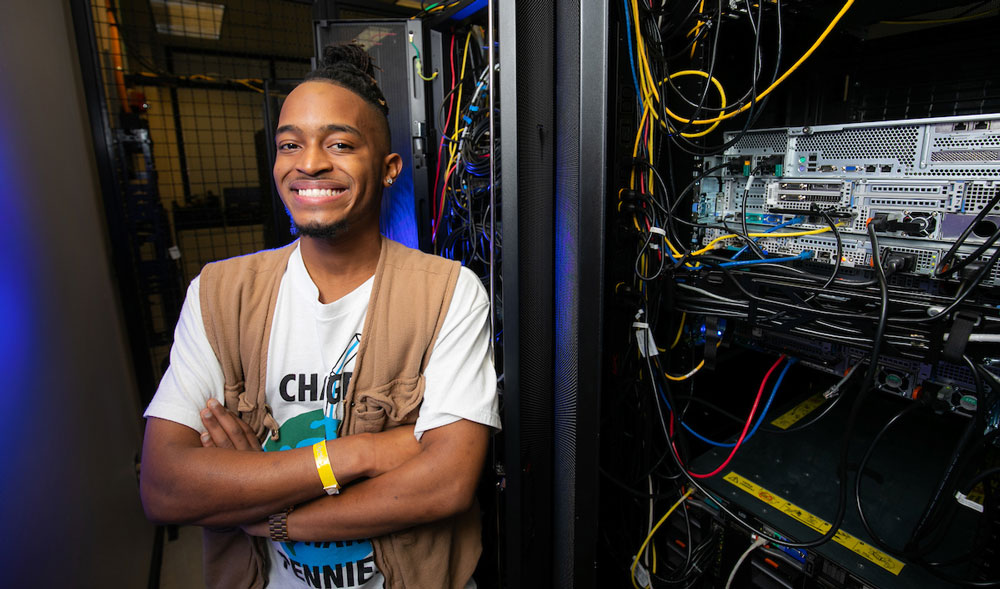 KENNESAW, Ga. (Dec 4, 2019) — Daniel Omuto arrived at Kennesaw State not knowing much about the school or what he wanted to study. That all changed when he decided to major in computer science, and as he prepares to graduate, Omuto will leave behind a lasting legacy.

“At first, I felt like I was dropped off in a foreign land without friends or a sense of direction,” said Omuto, an avid sports fan who originally considered a degree in sports management. “I didn’t know it at the time, but my experience here would ultimately shape me into the man I am today.”

Partially inspired by his mother, who immigrated from Kenya to earn a computer science degree, Omuto turned to KSU’s College of Computing and Software Engineering (CCSE) in his second year. Despite the slow start to his academic career, he will graduate from KSU this month, having made the Dean’s List five times, earning valuable work experience through a video engineering co-op at Cox Communications and founding the first student chapter of the National Association for Multi-Ethnicity in Communications (NAMIC).

Omuto credits meeting Kirk Inman, CCSE IT lab manager and part-time instructor of computer science, fellow student Harshit Joshi and advisor Anna Traykova, as a major turning point in his undergraduate journey, all of whom he said helped him recognize his potential. Inman, who Omuto looks to as a mentor, also instilled confidence in his computing abilities and it was Inman who eventually offered Omuto a position as a lab technician.

“Leadership, integrity, work ethic and creativity are characteristics that CCSE looks for in our students,  and Daniel possesses all of these qualities,” Inman said. “Having known and worked with him more than two years, I find him to be an innovative self-starter and exceptional leader. Most importantly, he is a creative thinker that does not shy away from complex problems.”

Having found a passion for computer science and software engineering, Omuto participated in an internship at Universal Technologies and a co-op at Georgia Tech Research Institute’s Cybersecurity, Information Protection and Hardware Evaluations Research Lab. In his current co-op at Cox Communications, he is tasked with designing, building and integrating prototype solutions in Video Lab.

For his senior project, Omuto and classmates Patrick Nguyen, Jiaing Li, Shikun Lyu and Jiahao Chen designed a monitor for the server room in KSU’s Atrium Building. Powered by Raspberry Pi microcomputers, the device is a temperature, humidity and vibration detector capable of notifying administrators when conditions in the server room are abnormal, thus protecting several thousand dollars in equipment. The group will present their project at the CCSE Computing Showcase, known as C-Day, on Dec. 5.

In October, Omuto was one of only 1,000 young leaders selected from across the nation to participate in Forbes Under 30 Summit in Detroit. As an Under 30 Scholar, he received complimentary access to an event connecting nearly 9,000 people with other leaders, founders and creators.

“I was able to engage with some very influential people, and really enjoyed speaking with Morehouse College President David Thomas about my work with NAMIC,” he said. “I was blessed to represent KSU, CCSE and Cox Communications at the summit, and I hope more students will follow in those footsteps.”

Intent on leaving a legacy at Kennesaw State, Omuto founded the NAMIC student chapter to expose students to the telecommunications industry, provide professional development and connect students with possible employers. For his efforts, the organization awarded him the Mae Douglas Scholarship, given to an individual who has made significant contributions to the communications industry and advance the organization’s mission of inclusivity.

“Few minorities know about the immense opportunity in the communications industry,” he said. “I feel like people have this image in their head that it can only be a highly technical field, but in reality there are so many opportunities for those who wish to pursue finance and marketing. It’s our goal to open those doors for other KSU students and land them in jobs.”

After earning his undergraduate degree, Omuto said he plans to pursue a graduate degree in analytics at the Georgia Institute of Technology while he works toward his goal of becoming a software engineer.